In mid-April, Tufts University used the Voatz platform to conduct its 2019 elections, with a voter turnout of nearly 1500 students.

Students had the option to either authenticate and vote with their smartphones, or via the Voatz tablet system, via a station located in the Tufts Community Center.

ABUJA, NIGERIA — A new mobile application developed by Voatz was used by 16 female candidates during the Nigerian 2019 General Elections earlier this year. The application, called Women Influencing Nations, or WiN, is designed as a politically-oriented social media platform to help women candidates run for office. Using WiN, candidates are able to garner followers, share events and create posts, and even collect political donations via mobile money.

The Voatz team traveled to Nigeria during the January campaign season to assist in the roll out of WiN. In partnership with UN Women, Women’s International League for Peace and Freedom (WILPF), and Mina’s List, Voatz helped lead a two-day training and information seminar with women candidates and aspirants from around the nation. ^Voatz with the team during the training in Abuja, Nigeria

In a country that faces election corruption and distrust, the seminar focused on engaging directly with voters and building an effective campaign. Together, the Voatz team and women candidates discussed topics ranging from creating and sharing a good campaign video to the importance of collecting small donations.

The WiN app is designed with these goals in mind, providing integration with large social media platforms such as WhatsApp and Facebook and making it easy to share posts about local events.

For the Voatz team, the opportunity was filled with inspiration. The women’s excitement was contagious and their gratitude warming. Different from our typical partners, which operate in firmly established democracies, the women are truly courageous, putting their status, reputation, and careers on the line to fight for their cause.

Opportunities such as these are invaluable to our team’s understanding of how our users interact with and receive our technology. Being immersed in cultures abroad, as many of our users are, offers unparalleled insights into how we can improve our outreach, technology, and overall mission.

Last week, representatives from our team attended the 9th Annual Meeting of Election Management Bodies, a gathering hosted by the International Center for Parliamentary Studies (ICPS).

The conference was held in Batumi, Georgia, and focused on the theme “Electoral Integrity: Cybersecurity and the Reliability of Information in the Digital Era”. These gatherings draw together election experts, analysts, representatives from election management bodies and research centers to discuss the challenges and complexities facing elections. The crux of the talk posed the question: what is the relationship between security and participation? Often, the two can be at odds with one another — greater security practices can make it harder to participate in elections, and great turnout can make securing polling stations harder. He shared that at Voatz, we consider participation to be part of security, and that both securing the vote and participation are critical for a democracy to function well.

We are delighted to announce the launch of a new pilot program today with the City of Denver that will provide mobile voting secured by the blockchain to deployed military personnel and overseas United States citizens during the city’s municipal elections this spring.

We commend the City of Denver for seeking new, innovative technologies to improve our election infrastructure and provide secure, auditable, transparent voting options for voters. With this pilot program, Denver is leading the effort to make voting more convenient and accessible for deployed military personnel and overseas US citizens. The latest developments in smartphone hardware, encryption and blockchain technology make mobile voting a reality. This is a significant stepping stone that we hope many other states and cities will follow.

Eligible deployed military and overseas voters from Denver will have the option to vote with their smartphones from almost anywhere in the world. By using the Voatz application on their mobile phones, they will forgo the time-consuming process of mailing in an absentee ballot, will receive an auditable confirmation, and will be able to verify their vote within seconds of voting.

Last fall, we first piloted our technology at the federal level with 24 counties in West Virginia. During the pilot, 183 voters were eligible to vote, 160 downloaded the application, 147 successfully completed the one-time identity authentication process, and 144 submitted ballots that were counted and audited from 31 countries around the world. More than 200 West Virginians outside the eligibility criteria (military personnel and overseas US citizens from 24 counties) downloaded the app and authenticated themselves, only to find out they were not eligible. These numbers indicate a 98% successful return rate on ballots received, and a 90% return rate on voters ballots requested. All votes produced: 1) a ballot receipt signed with an anonymous ID to verify the voter’s selections, and 2) an actual ballot with the same anonymous ID, formatted for printing and tabulation per standard procedures. These two verified trails enabled a thorough post-election audit by comparing the selections and the overall counts between the ballot receipts and the printed ballots.

The Denver mobile voting option will be offered in addition to the current absentee options (mail, fax, and email). For uniformed military and overseas citizens, jurisdictions are required by law to send the ballot to voters 45 days prior to the election, allowing sufficient time for the ballots to be returned and counted. Ballots sent to participating voters using the Voatz application will be received within minutes, rather than days or sometimes weeks, and can be returned to the jurisdiction the instant the voter submits their ballot. The ballots that the jurisdiction receives are formatted, printed, and tabulated per standard procedure, and contain an anonymous ID that can be used for a rigorous post-election audit.

To use the Voatz platform, eligible voters must submit an absentee ballot request to their election office indicating a preference for mobile voting, and then complete an authentication process on the Voatz application. Once a voter is authenticated, they will be able to vote beginning March 23 until the polls close in May.

The process begins once a voter downloads the Voatz application to their mobile device and begins the one-time authentication process. An eligible, registered voter: 1) scans their state driver’s license or passport, 2) takes a live facial snapshot (a video “selfie”), which is matched against the photo ID and confirmed against the voter registration database, and 3) touches their phone’s Voatz biometric feature (i.e., fingerprint or facial recognition) to tie the voter’s device to the voter. Once the voter is authenticated, the ballot is received and the voter is ready to vote.

Mobile voting secured by blockchain solutions can help address some of the biggest challenges in election administration by adding security, transparency, and trust to the system. We believe that expanding secure voting options in the United States will increase participation in elections and strengthen our democracy.

The pilot is a collaboration between Voatz, the City and County of Denver, Tusk Philanthropies, and the National Cybersecurity Center. To learn more, read the press releases from Tusk Philanthropies and the Denver Elections Commission.

On February 2, 2019, the Michigan Democratic Party used the Voatz platform for delegate credentialing and voting in Detroit, Michigan. In under an hour, more than 2,000 delegates cast their votes for three contests.

“Working with Voatz has streamlined our registration and voting processes,” the Director of Party Affairs said, “since we began with Voatz, we’ve dramatically reduced our wait times during credentialing and our members report higher satisfaction with the way ballots are cast.” The Town of Millis in Massachusetts piloted the Voatz platform for an innovative town meeting poll on Election Day (November 6, 2018).

“Voatz employees arrived early with plenty of staff, brought all equipment, and problem-solved issues (old building, poor WiFi connection, etc) throughout the day. They provided us results quickly and effectively and have remained in contact since the poll expired. Overall, we could not have asked for a better experience,” said the Town Meeting Review Committee.

We thank the 425 citizens of Millis who participated using their smartphones or the Voatz tablet stations.

The Voatz platform was used for delegate credentialing and voting at the 2018 Massachusetts Democratic Party State Convention in Worcester where nearly 4400+ delegates participated.

During this nominating convention, the Voatz platform was used for 3 contested races (Governor, Lt. Governor and Secretary of State). On May 7, 2018, Hopkinton, MA became one of the early towns in the country to officially pilot a mobile blockchain-based voting platform at its annual town meeting. Nearly 400 citizens voted.

We were honored to have had an opportunity to pilot the Voatz platform at the @HopkintonMA Town Meeting on Monday 5/7 – https://t.co/lPmf1HIx6A – Thank you to everyone who voted & for the great feedback.

The Voatz platform was used for credentialing and voting at the 2018 Massachusetts State GOP Convention in Worcester, where Massachusetts Governor Hon. Charlie Baker was one of the voters using the platform.

For the first time, a state-of-the-art biometric security system was deployed for each of the 4 contested ballots, and more than 2000 delegates voted. 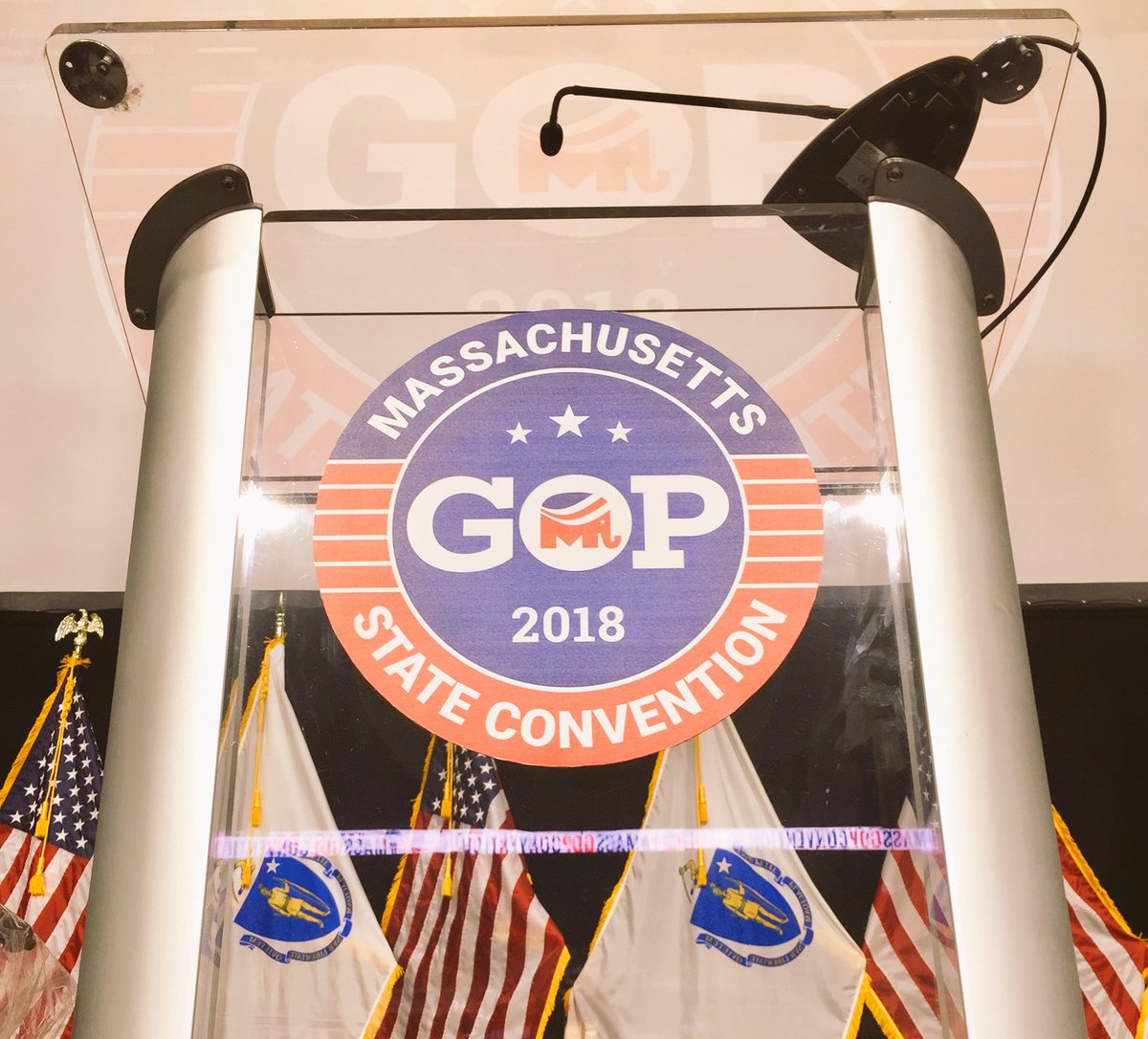 Clear Ballot and Voatz present a white paper for the 2018 NASS Winter Conference in Washington DC which addresses this tantalizing question.